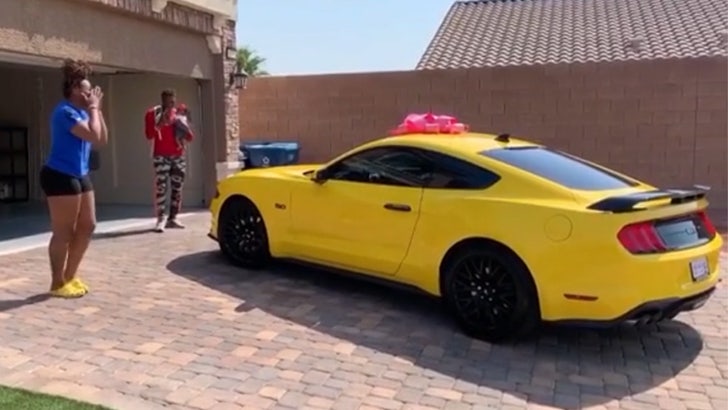 Here’s video of the NFL first-round pick surprising his girlfriend with a brand new, custom Mustang 5.0 — and yeah, dude’s clearly great both on the field and in relationships!!!

TMZ Sports has learned the former Alabama star receiver hit up Gaudin Ford dealership in Nevada for the whip … and as you can see in the footage, Ruggs clearly chose the right car.

Check out the clip … Henry brought his GF, Kiara Washington, and their 3-month-old daughter down to the driveway — and when Kiara realized what was happening, she busted out into tears!!

“Henry!!!” she screamed repeatedly … before adding, “Thank you!!”

We’re told 2020 Mustang GTs don’t come in yellow … but Ruggs made it happen because that’s his girl’s favorite color.

By the way, the car should remind Washington of Henry every time she gets in it … ’cause it’s fast as hell — we’re told this model has 332 horsepower and can go 0 to 60 MPH in under 5 SECONDS!!

As for price … unclear what the ride set back Ruggs — but don’t worry, dude just inked a 4-year, $16 MILLION contract with the Raiders.