I used to look forward eagerly to election night, when I was a kid. My parents, not normally ones for throwing parties, opened up our house every four years. It didn’t matter to me who won, I just loved the decorations, especially the board of old election pins whose obscure slogans—Give ‘Em Hell Harry, I Like Ike, All the Way with LBJ—seemed to me like ancient runes. I think back on these events, today, as we hurtle toward a presidential election of unusual significance, trying somehow, as Jesse Jackson put it during his own campaign for president in 1988, to keep hope alive.

What’s helped me to do that, in recent days, is another collection of election pins. They are the work of Toronto-based artist Kara Hamilton, best known for her sculptures featuring pieces of concrete, brass instruments, and other found objects. Hamilton was originally trained as an architect, and often places her works in purposeful dialogue with the built environment, describing them as “jewelry for buildings” or “critical decoration.” She also makes actual jewelry, a practice that she’s been able to maintain during the coronavirus lockdown.

With the election looming, it occurred to Hamilton that making pins might be a way to engage politically. As a medium of communication, campaign buttons have been swept into the desk drawer of history, rendered obsolescent by social media and other online platforms. But for Hamilton, that made the genre all the more attractive. She wanted to reinvent it, transcending its ephemerality, using it to speak not to the fraught exigencies of the moment, but to the American political condition as such.

With this in mind, she set to work, carving a series of designs in pink wax and then casting them in brass. The aesthetic she arrived at was impromptu, gestural. Hamilton typically recycles her metal from castoff jewelry and other junk-store finds, melting it down and giving it new form. Her aesthetic is informed by this process of making; it takes cues from the sprues (the metal left in the channels that enter and exit a mold) and other detritus that litter her workbench.

The pins’ materiality thus speaks to the idea of transformation. So, too, their lettering and imagery. Though executed in a manner that recalls the pop graphics of Corita Kent or Milton Glaser, the messaging tends toward the recondite. Yes, there is a pin that reads FUCK TRUMP—how could there not be?—as well as a few obvious allusions to the Statue of Liberty, the importance of TRUTH, and the simple injunction to VOTE. But most of the pins have abstruse motifs, reminiscent of Surrealism: a house on fire, a mouth spewing liquid, an eye with rays shooting out of it. Tears are a recurrent theme, rolling forth from an eagle, a bumblebee, an elephant, a flower. Also repeated throughout the work are the letters “US,” referring at once to America, and to those who live in it together. 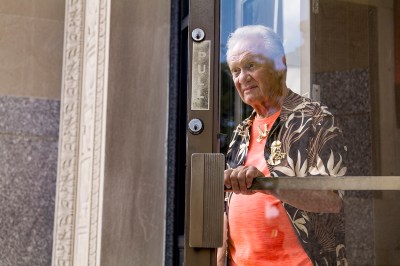 Hamilton gave the overall project the title “We the People.” At the outset, she determined that all proceeds from the sale of the pins (via Salon 94 gallery in New York) would go to charitable causes: FairVote and the Earthjustice Action Center. And that would have been that—except then it wasn’t. Enter Katy Grannan, the celebrated photographer, who has been a close friend of Hamilton’s since the two women attended graduate school at Yale some twenty-five years ago. They had never collaborated before, and here was a chance. They would bring the pins to life through Grannan’s signature strategy: making intimate portraits of complete strangers.

The first time Grannan did this, in the late 1990s, she made contact with her subjects through newspaper advertisements, and over the course of her career, she has retained an interest in unlikely encounters. She says that photography, for her, “is almost an excuse to engage with people.” She has also introduced other forms of connection. In her series “The 99” (2014), for example, the common thread is a road. She reprised the Depression-era technique of Dorothea Lange, traversing California’s Central Valley from town to derelict town along Highway 99, making portraits in the scorching midday heat, building a collective picture of a desperate, intense, and somehow heroic stretch of America. 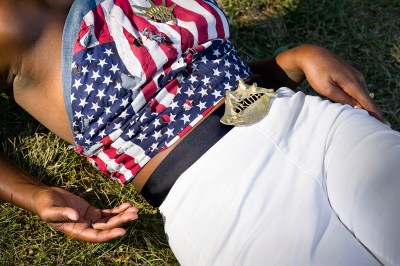 For the photographs in support of “We the People,” Hamilton and Grannan chose Newburgh, New York, as their shooting location. It’s one of those rough-and-ready Hudson River Valley towns that boomed for decades before finally going bust, as the local manufacturing and shipping industries faded away. Today it contains multitudes: a diverse population, about half Latinx, a quarter Black, the remainder white and Asian-American. Democrats outnumber Republicans about two to one. There is economic deprivation in Newburgh, but a few factories still operate there, and others have been converted into artists’ studios, indicating a nascent wave of gentrification. Newburgh is also a place of historic importance, having been Washington’s headquarters during the last year of the Revolutionary War.

Against this backdrop, Grannan and Hamilton set out looking for conversation—and they found it. The pictures, taken in the midst of the pandemic, at about the midpoint between George Floyd’s killing by police and the November election, capture America at a tipping point. Each conversation began with an unprompted overture on the street, in circumstances laced with the dread of communicable disease. (Adding to the sense of crisis, Grannan had to keep checking on her house in California, which was threatened by wildfires.) The people the two artists met in Newburgh didn’t speak much about the presidential election itself, but the many challenges of the moment, and their own sense of what it was to be American. Grannan and Hamilton would offer a range of pins to wear, sometimes singly, sometimes in clusters, like so many medals. Just as they intended, the resulting images convey not a single political message, but many variants of patriotism, as individual as the people themselves. 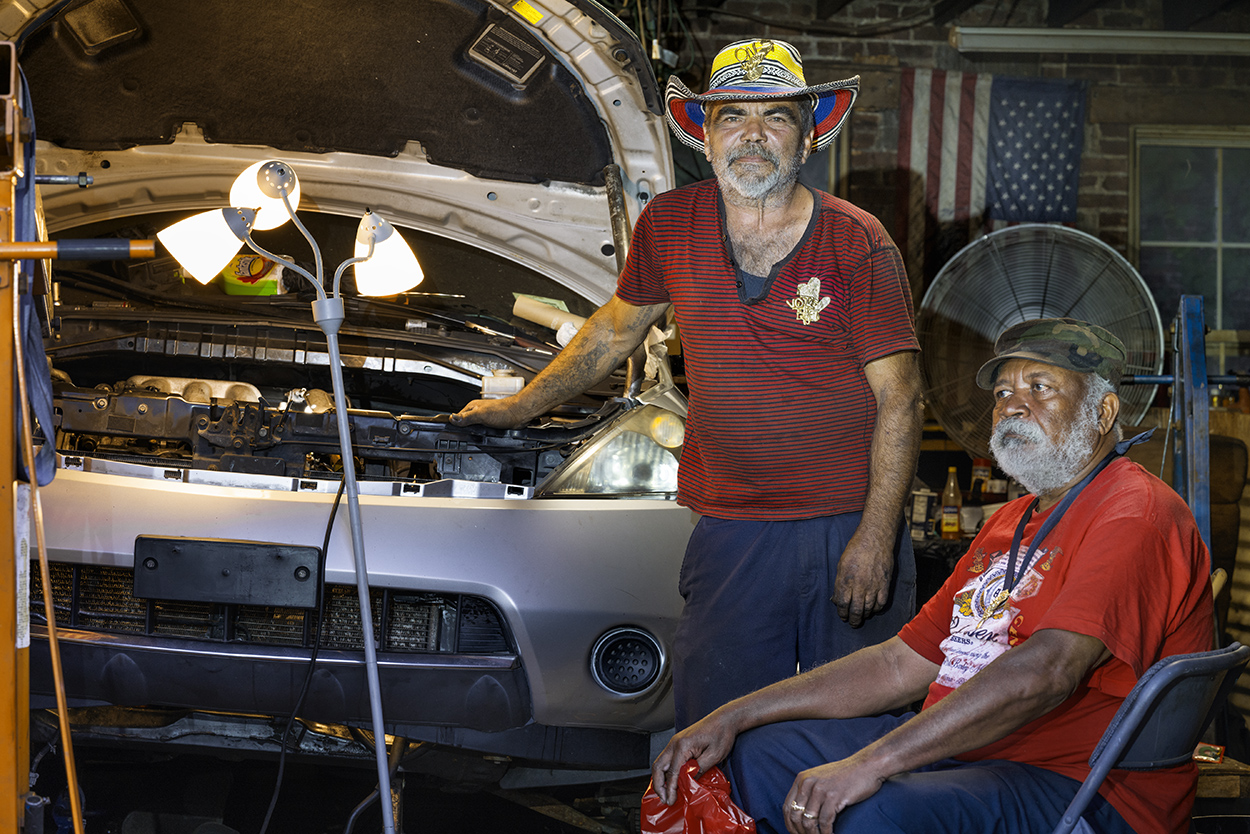 Grannan and Hamilton were able to include at least one Trump supporter in the project, a first-generation Italian immigrant who had operated a garment manufactory most of his life. (When his business went under, he blamed Bill Clinton and NAFTA, and he’s voted Republican ever since.) Grannan shows the man shielded by a glass door, which he holds ajar—as if he were being canvassed for his vote. He looks skeptical, but willing to listen. A timeworn PULL sign is positioned right in front of his eyes, as if voicing the question that hovers in the photograph: when contrary opinions meet, is there any chance of a shift in position? 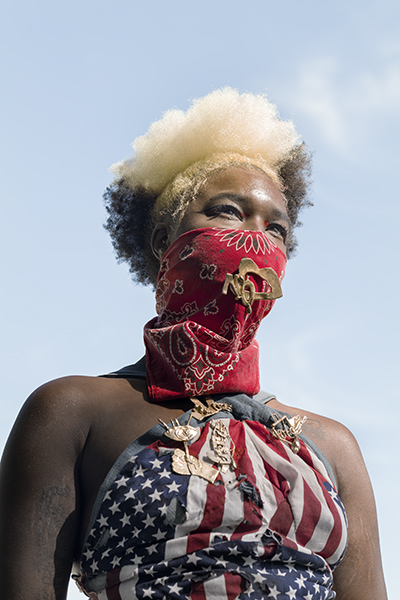 At the other end of the opinion spectrum was a Black fashion designer who had partly burnt an American flag and then fashioned it into a top. Grannan thought she looked like the Statue of Liberty, and posed her accordingly in one picture. In another, the young woman has her head held high, bandana wrapped around her lower face, peering out at the wild blue yonder. The pin she chose for the image shouts NO.

Looking at these pictures, I think back to the campaign buttons my parents brought out every four years. I think of the sense of urgency that once attached to them and eventually dissipated: words going in one ear of the body politic and out the other. In 2020, a year fired by protest, it can be hard to adopt that long view; to remember that most of our outrages will be another generation’s half-remembered trivia; that the truly important thing is civic culture itself. Hamilton’s pins will never be obsolete, because they are merit badges for democratic engagement itself. FUCK TRUMP? Absolutely. He has been uniquely destructive to America’s political system, which is based on reasonable and informed debate, in which we all have an equal voice. But even more important, TRUTH. US. And VOTE.