“Painting is very romantic, no matter how you slice it,” Willa Wasserman told me in a mid-quarantine virtual studio visit. The Indiana-born, Los Angeles–based artist plies their chosen medium against itself, retooling historical techniques in order to critique painting’s more troubling traditions—like the tendency of artists to subsume their subjects into their own worldview. “Painting is haunted by its history,” they said, “and we have to deal with the ghosts.”

In 2018, while working on an MFA at the University of California, Los Angeles, Wasserman began a series borrowing from the Renaissance tradition. Artists like Leonardo da Vinci used a piece of metal (traditionally silver) sharpened to a point and set in a stylus to draw precise renderings with fine lines. Endeavoring to emphasize the ways in which representing (and even perceiving) a subject always involves some projection on the artist’s part, Wasserman takes on the metalpoint technique as both medium and object of critique—drawing instead with brass wool. The artist uses the tangled mass of thin brass wires, a cleaning and polishing tool, to create blurry images on linen panels of varying sizes. They portray friends in parks, in front of a bird bath, and among horses. Usually, Wasserman draws from life—though their hazy renderings make it hard to discern details like faces or gender. In this time of social distancing, the artist has instead been deriving images from a 1970s anatomy book. The gray marks that the brass wool leaves cannot be erased and are difficult to alter. In a sense, the works stay forever in the sketching phase, eschewing the pretense of completion. 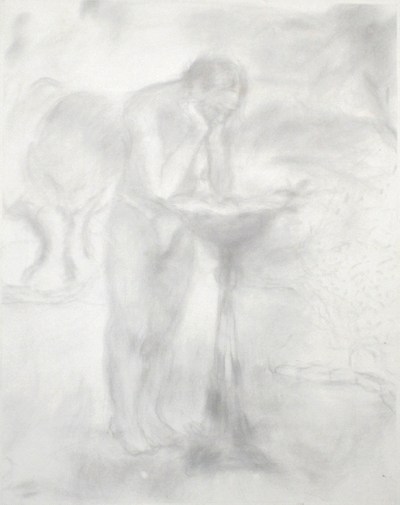 Wasserman, who has a background in metalworking, discovered the process by accident: they were burnishing steel with a wire brush in an unsuccessful attempt to meld their painting and metalworking practices, an experiment that left shimmering marks on the studio wall. “The technique is a restraint against my own bullshit,” Wasserman noted, regarding the forced haziness of the resulting images. The same could be said of the method they use to create paintings with Jenny Gagalka and Beaux Mendes, fellow members of the collective En Plein Error. The trio holes up together for thirty-six-hour sessions, passing around paper and oil pastels, riffing off each other, and off quintessential art historical motifs (Noah’s ark, bathers). Countless famous paintings were made collaboratively in workshops, yet in En Plein Error, there is no hierarchy, and everyone gets credit.

Wasserman also paints still lifes— typically flowers in vases—observing the subject not directly but in a convex mirror. The resulting paintings, rendered in oil on carved poplar wood, are convex, too—1:1 depictions of the reflected image. Here, there is no effort to translate a three-dimensional image onto a two-dimensional surface. Indeed, Wasserman chafes at “painting’s historical pretension to showing more than what’s on the surface”—as seen most literally in works by Renaissance artists like Jan van Eyck and Petrus Christus. These painters used convex mirrors to expand their purviews 360 degrees, suggesting a kind of omniscience. In Wasserman’s paintings, the mirror is decidedly not a tool used to widen the scope of the artist’s subject, but instead, to flop it, distort it, and render it less familiar. The artist first began painting floral arrangements to learn about color, but has now come to see them as an homage to their grandmother, who was also a painter, and a gardener. Last year, for a first solo show at Nothing Special, Los Angeles, Wasserman interspersed works by both artists—again thwarting painting’s individualistic tendencies, and emphasizing the romanticism inherent in even the most self-critical of paintings.

This article appears under the title “Willa Wasserman” in the September/October 2020 issue, p. 12.