One starry evening, a teenage boy washes onto a beach on one of the Channel Islands between England and France. As the last rays of sunlight turn the sky violet, he pulls himself to his feet and begins walking toward a nearby road to look for help. Instead of help, he finds a speeding car, which slams into him before its driver, a retired cartoonist living on the island with her wife, can hit the brakes. When the couple learn their inadvertent victim is likely a refugee of unknown legal standing, they realize the hospital might be an even more dangerous place for him than the roadway, and they take him to their home to try and hatch a plan.

The conversation that follows is the main focus of The Outcast Lovers (2020), the latest in a series of narrative vignettes made “in reaction to the shifting political climate” by game designers Richard Tongeman and Antony de Fault, who work together under the label Far Few Giants. It’s one of a number of recent indie games that foreground the ethical complexity of life amid the slow but alarming spread of authoritarianism—a trend that runs counter to the mass-market action games where players run amok in the aftermath of collapse.

The art of The Outcast Lovers recalls an old iPod commercial, with faceless silhouettes moving through a world of synesthetic pastels. Playing it feels a bit like taking a questionnaire: you click through the dialogue and are periodically asked to make a few choices about how to proceed (e.g., will you encourage the boy to eat by offering him some candy, or mime an eating motion to encourage him to dig into the plate already in front of him?). At any time, you can shift between five camera angles showing the three characters seated around a dining room table. The cartoonist, a woman named Ola, suggests taking the boy in permanently, as if he were a stray puppy too cute to release. Her wife, Mary, wants to turn him over to the police, arguing that they’ll feed and shelter him, and, more importantly, protect him from the even worse fate of being detained by Immigration Enforcement, a recently formed arm of the United Kingdom’s Home Office that patrols the country’s cities and suburbs in search of refugees and immigrants, sometimes with warrants and sometimes without. 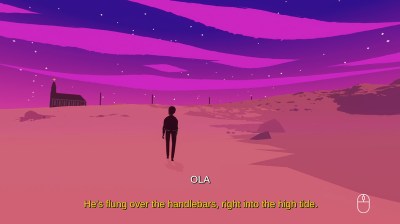 Screenshot from the video game The Outcast Lovers, 2020.

As they debate the boy’s fate, he remains silent—either because he doesn’t understand English or doesn’t trust either woman enough to speak with her. The couple intermittently fret that he might have hypothermia from his long swim, or a concussion from the accident. Fearing he’ll become catatonic if he falls asleep, they try and keep him distracted, plying him with hot tea and candy, trying to communicate through hand gestures, and finally resorting to loud dance music, an audio cue that triggers the arrival of the IE and sets up a climax in which players can choose to either hide the boy or turn him over.

In some ways, the presentation of this moment feels shallow and glib, like a Buzzfeed quiz that tells you which Schindler’s List character you are. The consequences of either choice are limited. If you play the hero and hide the boy from the IE, you’re rewarded with a cryptic message that says the “world outside” didn’t hear from the boy again for six years. If you turn him in, you get the same message. The outcomes feel almost interchangeable. You’re free to choose as you wish, yet neither choice is likely to give you what you want. 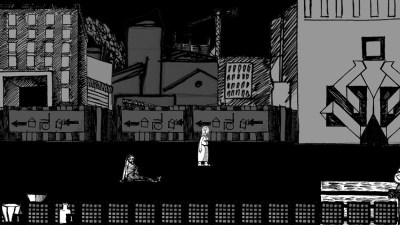 In Vasilis (2019), from the Ukraine-based studio Marginal Act, the tension between individual wants and overarching social change stretches into the absurd. Inspired by the events of the 2014 Ukrainian Revolution, though not exactly based on them, the game is about an old woman, Vasilis, who wakes one morning to find her husband missing. Players guide her through a city in the midst of an uprising as she asks passersby if they might have crossed paths with her husband while they marched, set the public administration building on fire, or seized a gas station to keep the national guard from replenishing its supplies. Each day, the ebb and flow of revolution remakes the city map, as barricades are built up and torn down to open or shut down streets. Meanwhile strange new phenomenon appear, like human body parts preserved in glass jars, mysterious towers that seem to have been constructed overnight, and crosses that radiate hallucinatory circular patterns etched onto building faces. The events happening in the streets are apparently incomprehensible to Vasilis, and the only thing that helps her organize her days is the search for her husband, even as that draws her deeper into the nonsensical and nightmarish. 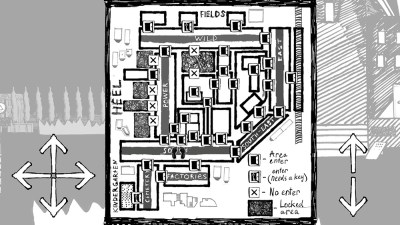 Where The Outcast Lovers is lush and colorful, Vasilis employs black-and-white sketches, scratchily animated 2D doodles that could have been made by a student during a boring lecture. Both games are rendered in cautious, noncommittal terms, as if the creators reserve the right to transform them into something else entirely should a newer idea occur. But these tentative aesthetics sensualize the overwhelming confusion of social upheaval, and the anxiety of being unable to tell, in the moment, progress from implosion, rising from falling.

Big-budget games excel at depicting catastrophe, letting players triumph over worlds pushed past the point of ruin. In these cases, social collapse is the fallout of an unexpected disaster. In The Last of Us Part II (2020), one of this year’s major blockbusters, most of the world’s population is wiped out when a type of cordyceps fungus found on grains from South and Central America makes the jump to humans. The survivors retreat into enclaves that periodically wage war against each other, as if they have nothing left to organize their lives around other than mutual hatred. These games lament the dignity humans lose when society collapses through no fault of its own.

But games like The Outcast Lovers and Vasilis depict something different, and far more disturbing: societies that fail not because of a tragedy that no one could have seen coming, but by design. Things don’t fall apart so often as wicked plans come together. Most people will find a way to live with them, or even cheer them on.