End papers, small rectangular sheets of translucent paper that protect hair during the perm process, are the basis of Los Angeles–based painter Mark Bradford’s early artworks. While working in his mother’s beauty salon, Bradford began integrating the papers into abstract paintings, creating a layered scrim through which the paint emerges. The artist, guided by an interest in common materials, has incorporated items from around Los Angeles—including fragments of posters, broadsides, and billboards—to tackle issues of civil unrest. His painting Kingdom Day (2003), appropriating advertisements and other images, refers to the 1992 edition of the annual Los Angeles parade honoring the birth of Dr. Martin Luther King Jr. In an attempt to help alleviate racial tensions, it recalls the first year a Korean-born parade grand master was appointed, following the fatal 1991 shooting of Black teenager Latasha Harlins by a Korean storeowner and the brutal police beating of Rodney King. A selection of Bradford’s end paper paintings is on view in a solo exhibition spanning two decades at the Modern Art Museum of Fort Worth in Texas through January 10, 2021. In conjunction with the show, Bradford created a billboard installation for the museum’s “Modern Billings” program in downtown Fort Worth. Displayed from early May to mid-July, the project featured three pictures of the late “Mr. LaMarr” from the photo archive of fellow hairdresser Cleo Hill-Jackson. Additionally, an online exhibition of Bradford’s quarantine paintings can currently be seen on the Hauser & Wirth website.

What initially prompted you to incorporate end papers into your abstract paintings?

I love being a painter! I’ve always been fascinated by the history of abstract painting, particularly how it relates to the New York scene in the 1950s. Having one foot in the studio and another in American culture, I’ve found alternative ways of approaching abstraction. As I was finishing grad school, I gravitated towards sources of comfort. End papers are a very tactile material that I had spent a lot of time with while working at the salon doing perms. Not only was the salon a source of income, but it also provided strength and inspiration to be a painter in the art world—like taking an old friend along when you go somewhere new and unfamiliar.

I became interested in unpacking these two concepts. The way I layer end papers like a grid across the surface of my paintings lends itself to a conversation about abstraction, but the end papers also serve a purpose and come directly from the world in which I was living. I don’t see my abstract paintings and incorporation of end papers as two exclusive impulses. In my practice, they have always gone together. 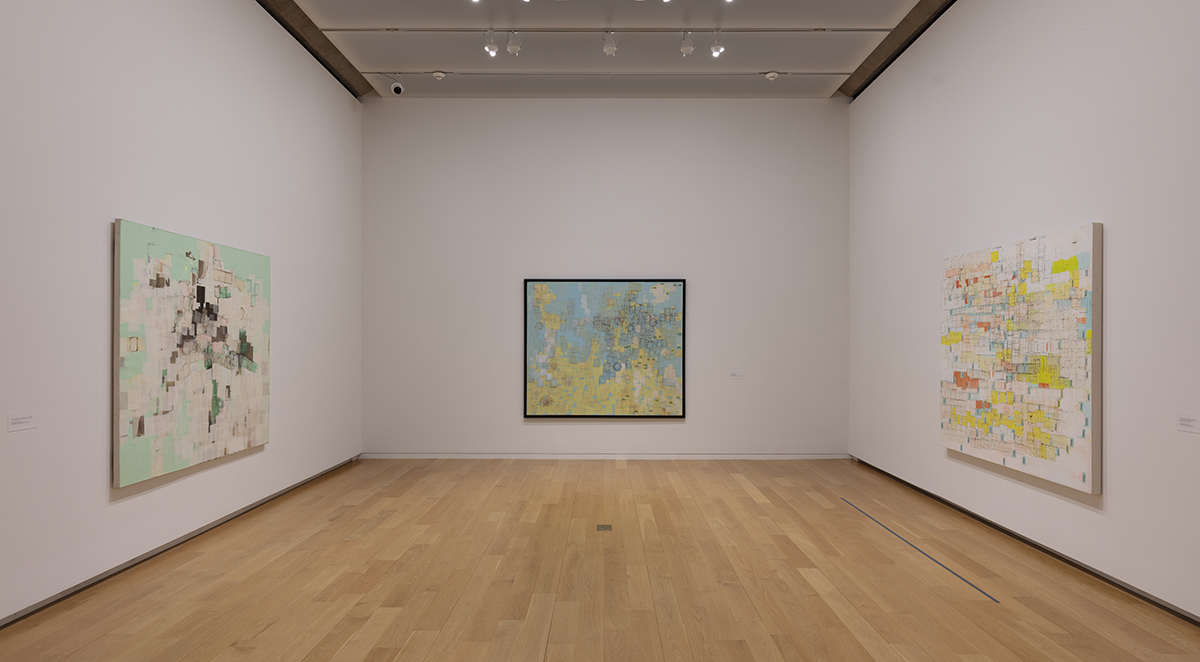 View of Mark Bradford’s exhibition “End Papers,” 2020, at the Modern Art Museum of Fort Worth.

How has your use of end papers evolved over the course of your career?

Well, it’s become my origin story. There was a moment, during maybe my second or third show, when I felt that the narrative of working as a hairdresser in South Central started to eclipse other parts of my work. But I figured the narrative would change as I matured in my process.

I hadn’t given much thought to the materiality of the end papers until I started experimenting with other types of paper. End papers are similar to tissue paper, and are very absorbent and translucent. When I was painting, it was a lot easier to achieve layers of color due to those qualities of the end papers. As I started adding more opaque materials, like billboard and poster paper, the paintings looked flat. That’s when I began dunking paper in water. I thought maybe if the pulp disintegrated, a little bit of light could pass through. This addition really shifted my practice. To this very day, I still use water because it’s the only thing that pulls the paper apart and makes it flow like paint.

Every time I ran up against a problem with the material, I developed a new visual vocabulary. It reminded me of working in the salon and trying to give women the hairstyles they wanted based on pictures. I think that tenacity comes through in my art practice as well. Even if I put a painting away for a year or two, I never give up on it.

As I walked through the show at the Modern, I enjoyed seeing all the works in one space. I remember working on each of them and all the things that I was struggling with. Some were a little bit more tumultuous than others. But they all represent a moment that I kept moving through. I’m glad these paintings were how I entered the art world.

Some of your work has reexamined key events in American history. Can you talk more about this inclusion?

I’ve thought about what a city looks like after civil unrest and how that could be turned into something more meaningful through abstraction. The painting Kingdom Day combined elements of Abstract Expressionism with a celebration of Martin Luther King by way of a Kingdom Day Parade in Los Angeles that is greatly supported by the Korean community. The pictures that I abstracted originally showed the parade princesses. It was just one of those times when one sees how politics, culture, and race could coalesce. 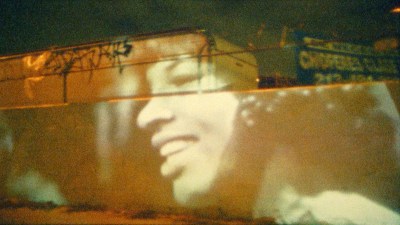 My more recent video, Dancing in the Street [2019], makes use of the titular song by Martha and the Vandellas. Some people believe that the song was a call to action, while others maintain that it was just a great Motown number. I took footage from the group’s performance and projected it onto buildings in an LA area known for civil unrest in the 1960s. It looked like ghosts dancing on the buildings and really brought together the past and present into one cohesive moment.

Both works follow a similar impulse as the outpouring of support and protests behind the Black Lives Matter movement. It’s important to engage charged landscapes and the protests happening right now. This has always been going on. We’re just having a different look at it.

How have events such as COVID-19 and the Black Lives Matter protests impacted your current practice?

At the beginning of the pandemic, I had a lot of triggers because in some ways it reminded me of the AIDS epidemic. It’s been great to see that so many have mobilized in this moment for positive change and have found creative and interesting ways to make their voices heard. I’ve learned to be kind of fluid and keep creating work. I like to say that I’m not on Pacific Standard Time, but rather on Pandemic Standard Time—and I chuckle when people send me calendar invites for upcoming events. 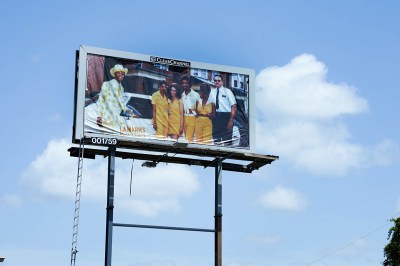 View of the installation project “Modern Billings,” 2020, showing the late hairdresser Mr. LaMarr, from the archives of Cleo Hill-Jackson, in Fort Worth, Texas.

Engagement with your surroundings and community has really driven your oeuvre. How did that inform your recent “Modern Billings” murals in Fort Worth?

This project started as a proposition. When I was working on it, I brought some of my hairdresser friends into the conversation, and it became a kind of collaboration. My friend Cleo has a great photo archive. The images feel like they are beyond a time capsule. I love the snapshot of this fabulous hairstylist LaMarr. He always had this great essence and was always billboard ready. I feel like he is looking down from heaven with some gold lamé wings saying, “Well, of course, darling.” The best part is that it wasn’t prepackaged and sold—these images are just the authentic LaMarr and Cleo. I didn’t feel the need to alter them. It felt like a moment to just share because you never know.