Image © Andrei Savitsky, cupoty.com. Winner: Micro. “Glass worms can vary in length from about half an inch to two inches. On the right side of this image you can see the large tracheal bubbles that serve as hydrostatic organs (or swim bladders). These bubbles allow the larva to keep its horizontal position in the water column, while also helping to regulate the depth of its immersion. The bubbles are covered with dark pigment cells that can resize – if the cells expand due to absorption of light, the tracheal bubbles heat up and increase in volume, reducing the weight of the larva and causing it to float up. To create the picture here I made a panorama of eight frames, each of which was focus stacked. To make the image as detailed (and aesthetically pleasing) as I possible I used darkfield and polarisation techniques.” All images shared with permission

Captured around the globe, the winning shots in the 2020 Close-Up Photographer Of The Year glimpse some of nature’s most fascinating details, from the organs inside a shimmering glass worm to slime molds bursting with fruit. Dr. Galice Hoarau, an evolutionary biologist living in Bodø, Norway, took the top prize for his image (shown below) of a serpentine eel larva spotted during a blackwater dive.

In its second year, the annual contest garnered more than 6,500 entries from 52 countries. Photojournalists Tracy and Dan Calder, a wife and husband duo based in the United Kingdom, launched the competition in 2018 to “encourage photographers to slow down, enjoy their craft, and make long-lasting connections with the world around them.” Explore some of Colossal’s favorite close-up, micro, and macro shots below, and dive into the top 100 images on CUPOTY’s site. (via Design You Trust) 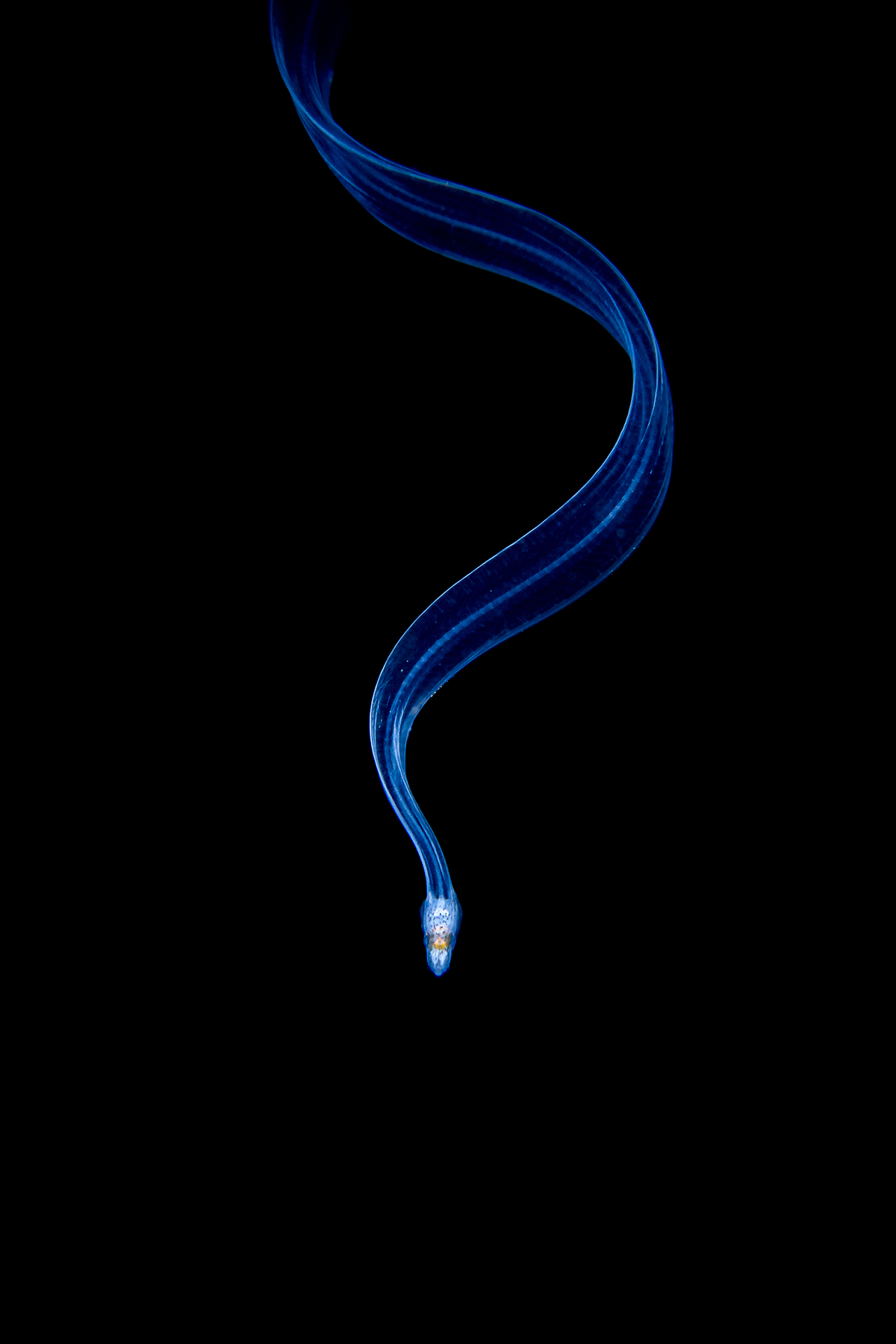 Image © Galice Hoarau, cupoty.com. Animals and Overall Winner of Close-up Photographer of the Year. “I spotted this eel larva off the island of Lembeh (Indonesia) during a blackwater dive. Blackwater diving is essentially diving at night in the open ocean, usually over deep or very deep water. Divers are surrounded by darkness, with only a lit downline as a visual reference. Peering through the darkness with your torch can be quite stressful the first time you do it, but it gets fascinating quickly. What makes blackwater diving so magical is the abundance of rarely seen planktonic creatures you spot as they take part in one of the largest daily migrations of any animal on Earth. After sunset, small pelagic animals (like this larva) rise close to the surface to feed where the sunlight has allowed planktonic algae to grow. At sunrise, they dive into the depths and stay down there during the day to escape predators.” Image © Barry Webb, cupoty.com. 2nd Place: Plants & Fungi. “This image is a stack of 34 focus bracketed images. It was taken in February 2020 in a mixed woodland in Buckinghamshire, UK. It shows a line of 2.5mm high, fruiting bodies of the slime mold Metatrichia floriformis growing on a decaying beech trunk. I always use a x10 loupe with built-in LEDs to examine slime molds and to help me pick out the optimal composition. Initially, I liked this group because it showed different stages in their development. But when I looked through the magnifier, I noticed that the fruiting bodies resembled people standing in a line – the holes in the stems looked like little legs!” Image © Juan Jesús González Ahumada, cupoty.com. 2nd Place: Insects. “When night falls, water scorpions rise to the surface of the pond and begin to interact with fellow water-dwelling creatures. While they might have a sinister appearance, these insects belong to the genus of bed bugs and aren’t actually dangerous. The caudal tube that helps them to breathe (and resembles a tail) is harmless. The pincers, however, help them to grab their prey, which they then kill with their beak. To show their wonderful outlines, and reduce them to silhouettes, I placed two flashlights under two water scorpions in the pond.” Image © Chien Lee, cupoty.com. 3rd Place: Insects. “Bioluminescence is abundant in the Bornean rainforest at night, a feature that becomes evident as soon as you turn off your headlamp, but few organisms emit a light as strong as Lamprigera beetles. Close relatives of fireflies, Lamprigera differ in that the females are wingless and produce a bright and steady greenish light from the tip of their abdomen. During a night walk in the mountains of southern Sarawak, I found this large specimen crawling through low vegetation, presumably on the hunt for snails, their preferred prey. To capture the bright continuous trail of light from its abdomen, I used a long exposure as it made its way along a stick, coupled with a single rear-sync flash.” Image © Csaba Daroczi, cupoty.com. 2nd Place: Animals. “I was preparing to take pictures of bogbean (Menyanthes) at the Turjanos nature conservation area near Kisőrös, Hungary, when I glimpsed this composition in the marshland. I carefully set up my tripod, and prayed for the spider not to move. It allowed me a few pictures before disappearing into the foliage.” Image © Giacomo Redaelli, cupoty.com. 2nd Place: Young Close-up Photographer of the Year. “I had already photographed great crested tits close to home, but this time I wanted a picture of one against a blurred white background to make the red-eye of the bird stand out. To create the picture I had in my mind’s eye I had to travel four hours to a wood in Switzerland. It was very cold and the snow-covered almost everything. When I arrived, I saw many birds in the wood, but no crested tits. I walked for almost an hour in this beautiful landscape before I heard a familiar call. I stopped, took my camera out of the bag and waited, without moving. I couldn’t tell where the call was coming from. After a while, a crested tit flew on to a branch right in front of me. I moved as slowly as possible, trying not to scare it away, and brought my camera up to my face. I was so happy to see the bird in the viewfinder. I focused on the eye and got a few nice shots.” Image © Heather Angel, cupoty.com. 3rd Place: Micro. “This time-lapse shows how green hydras (Hydra viridissima), although sessile (fixed in one place), can move around. A hydra moves by looping over and over, attaching the tentacles, then detaching the disc before reattaching it. They can also move by floating upside down. This particular hydra was attached to a petri dish raised up from a black background so it could be lit from below using darkfield illumination (DFI) and a microscope. The paler margins of the hydra’s body are a result of DFI. The green color is caused by symbiotic algae that live inside the hydra. In return, the algae provide nutrients to the hydra via photosynthesis. Hydras feed on small crustaceans, including water fleas.” Image © Mathieu Foulquié, cupoty.com. 3rd Place Animals. “This common toad (Bufo bufo) took a liking to me, probably because I looked like a frogman myself. He didn’t stop following me during my two-hour dive in the Buèges karst spring (Hérault, Occitanie, France), so he became the perfect model.” Image © Mike Curry, cupoty.com. Winner: Insects. “I was visiting Goole, the town where I was born in East Yorkshire, in 2018 as my dad was very ill in hospital. To take my mind off things I went for a walk with my wife Justine. There had been no time to pack really so all I had with me was my iPhone XS. We were walking towards the docks when I saw some beautiful peeling paint on an abandoned building site. I went over to photograph it when Justine asked if I had noticed the butterfly too. I hadn’t as I was miles away, but I had already captured this image serendipitously. It felt a surreal moment as my dad particularly liked butterflies and always commented that they represented relatives who had passed away, making it even more poignant. Unfortunately, he passed away shortly after, so this is a special photograph for me.” Image © Tamás Koncz-Bisztricz, cupoty.com. Winner: Young Close-up Photographer of the Year. “I regularly visit a meadow near my hometown of Csongrád-Bokros, Hungary, observing the site in all seasons. The meadow is grazed by Hungarian grey cattle, which keeps the place in relatively good condition. One frosty winter’s morning I headed out to take some extreme macro shots at the surface of some frozen water that had pooled in the tracks left by a tractor. Crouching down, I spotted some yellow globular springtails (Sminthurus maculatus) which feed in the sunrays reflected from the ice. I used LED torches to illuminate one of them, and came away with a picture that celebrates this tiny creature.”