The painter Ron Gorchov died on August 18, at age ninety. In celebration of his work, we are sharing this review of Gorchov’s 2005 solo show at Vito Schnabel, published in our November 2005 issue. —Eds. 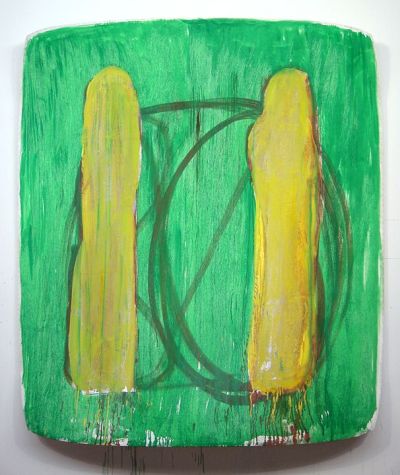 This exhibition, Ron Gorchov’s first in over a decade, offered an overview of the painter’s work since the 1970s. The 75-year-old Gorchov started his career in New York in the late 1950s, making Abstract Expressionist-derived paintings. Abandoning this approach in the 1960s, he began to develop works that were characterized by an eccentric mix of formal and expressive concerns. In a non-programmatic manner, he linked the issues of abstract image-making, nonrelational composition and objecthood.

The earliest paintings in this exhibition employ the shaped-canvas format (a bowed surface and rounded-off corners) that became Gorchov’s signature. These shaped canvases feature scruffy monochromatic grounds over which float paired forms (generally thin verticals). Another device he used to emphasize the objectness of his paintings was to leave exposed the ragged edge of the canvas and the staples used to attach it to the stretcher. By these various means, Gorchov makes the viewer aware of the painting’s surface and support. 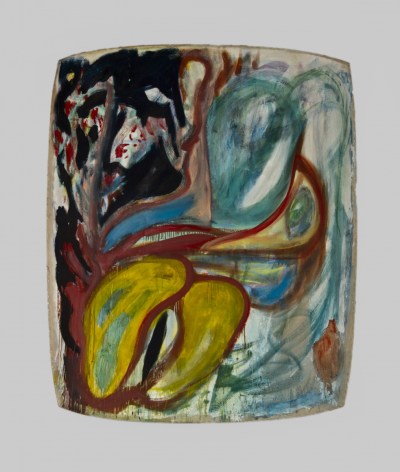 This interest has continued throughout his career and is a fundamental aspect of two large freestanding constructions consisting of vertically stacked, monochromatic shaped canvases. One of them, a piece that was first shown in the 1970s but only recently completed, the 20-foot-high Entrance (1972/2005), consists of two 15-foot-wide canvases—one yellow, the other blue—balanced like a lintel on two posts of equal height, one made of four differently colored canvases, the other of six shorter ones. By the 1980s, however, Gorchov was creating asymmetrical pairs of organic forms or singular shapes. Continuing to employ a shaped support, he turned to spontaneously painted forms and drawn elements that can only be described as expressionistic.

The most recent works in the show—a group of modest-sized, somewhat painterly striped compositions in a conventional, flat rectangular format—seemingly mark Gorchov’s abandonment of the shaped canvas. Across his different formats, Gorchov has emphasized the primacy of color, process and form; he is not a conventional formalist who would reduce painting to its essential qualities. Instead, in the manner of painters such as Ralph Humphrey and Al Held, Gorchov has pursued a supremely personal brand of abstraction.