We have seen those photos being passed around on Facebook, Instagram, and Twitter about people creating beautiful beadwork imagining their state or providence where they live or where their people are from. This trend was started by CeeJay Johnson (Dakota/Tlingit) of Kooteen Creations, who wanted to create something that would help our Native community pass the time while we are all in quarantine.

My friend Chelsea Herr (Choctaw Nation) participated in this challenge. Chelsea recently earned her doctoral degree in Native American art history and joined the Gilcrease Museum team as their curator of Indigenous art and culture. She created a beautiful design for Oklahoma. I asked her a few questions about her experience and her project. 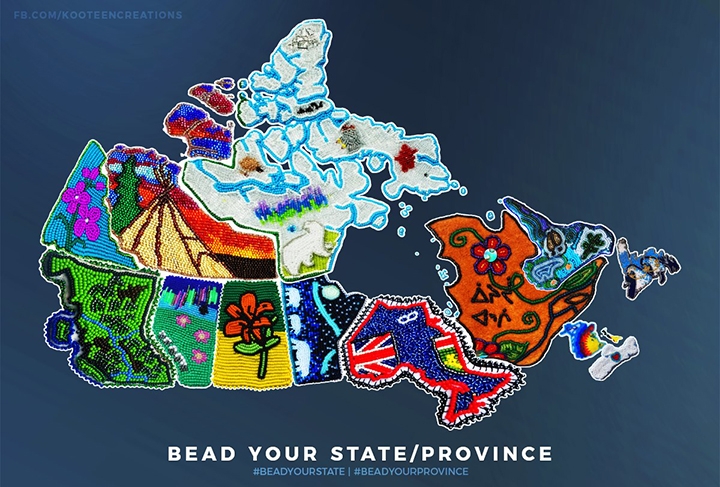 FAAM: How did you hear about this challenge?

Chelsea: I heard about this challenge through Kooteen Creations’ (CeeJay Johnson) social media. I’ve followed her for a while now, because she posts great tutorial videos on how to do unique edging techniques. When she announced the “Bead Your State” challenge, I was so excited to have an opportunity to create something with other bead workers across the continent!

FAAM: What inspired you to use the pattern and colors you chose?

Chelsea: The pattern was inspired by the geographic location of Tuskahoma, which was the original capitol of the Choctaw Nation following our removal from Mississippi to Indian Territory. The colors are taken from a typical “flame” motif, but I used them in circles radiating outward from Tuskahoma. The concentric design reflects two things: the physical structure of the Earth, from the core out to the crust and to the atmosphere; and the spherical view of the universe that my Mississippian-Muskogean ancestors held. 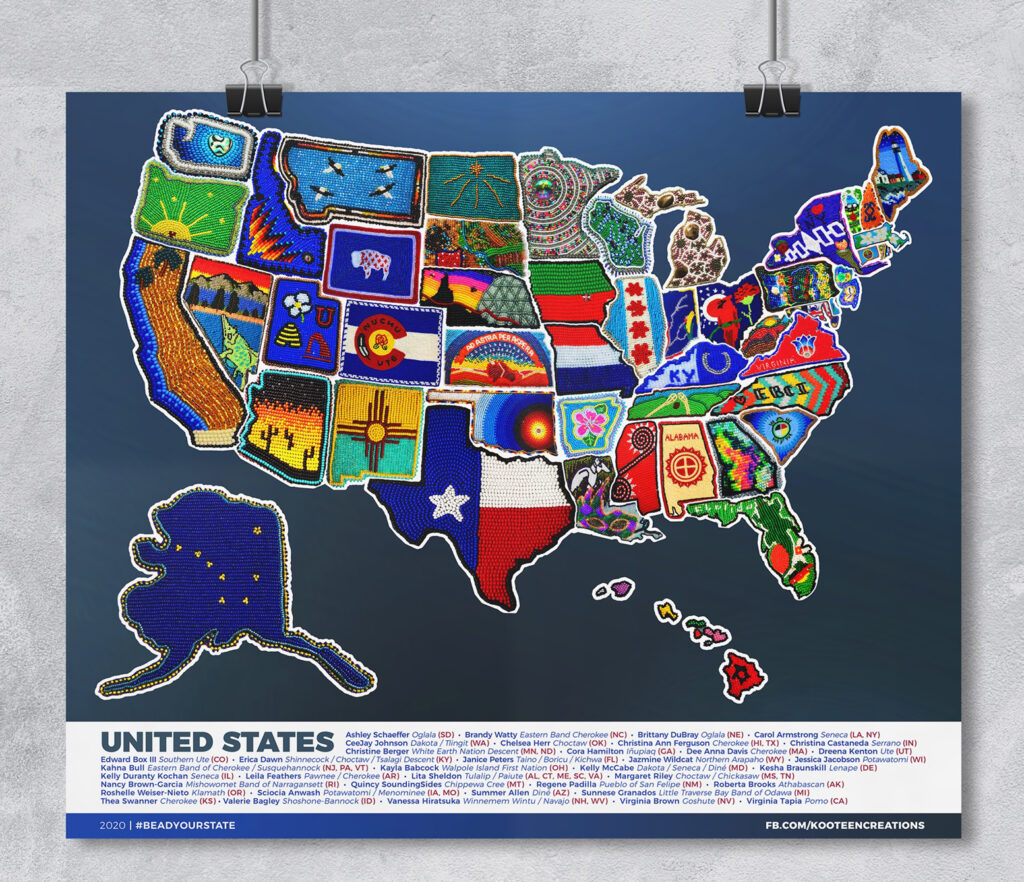 FAAM: How long did it take for you to finish?

Chelsea: I have no idea how long it took to finish. I’d estimate between 15 and 20 hours, including the edging and turning the final piece into a medallion. I tend not to pay attention to the time involved with each of my projects, because being present in the process is very important to me. The act of beading is therapeutic—I often sit down in the evenings after work and just bead to relax my mind, so it’s hard to keep track of the time.

FAAM: What does your creation mean to you?

Chelsea: The final product itself is an expression of my connection to my community, and our communal connection to a land that is not ancestrally ours. We were forcefully displaced from our homelands in Mississippi, and I respect the commitment that my ancestors had to making this new land in Indian Territory feel like a home. When I moved from California to Oklahoma five years ago, it felt like coming home in a way, and I know that feeling comes from a genealogy of people who were determined to survive and create a prosperous world for their descendants. 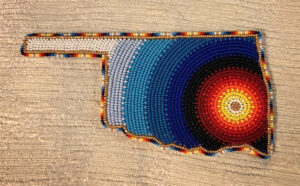 Chelsea: My beading process is very unstructured and improvisational. I know a lot of bead workers plan their designs and final products before they even begin, but I don’t work that way. To me, it’s much less stressful if I sit down with a basic idea—such as the outline of Oklahoma—and some colors that I’m drawn to, and just start beading without a detailed plan in mind. I think that allows the beads, the designs, and the colors to speak for themselves.

Kooteen Creations mentioned in a Facebook post that, “All in all, this project grew to encompass artists from every corner of the nation and solidified the fact that when we come together to work towards a common goal, we can accomplish anything.” This challenge proved that we can accomplish anything when we work together to create something beautiful.